A heart for sweets and mini treats 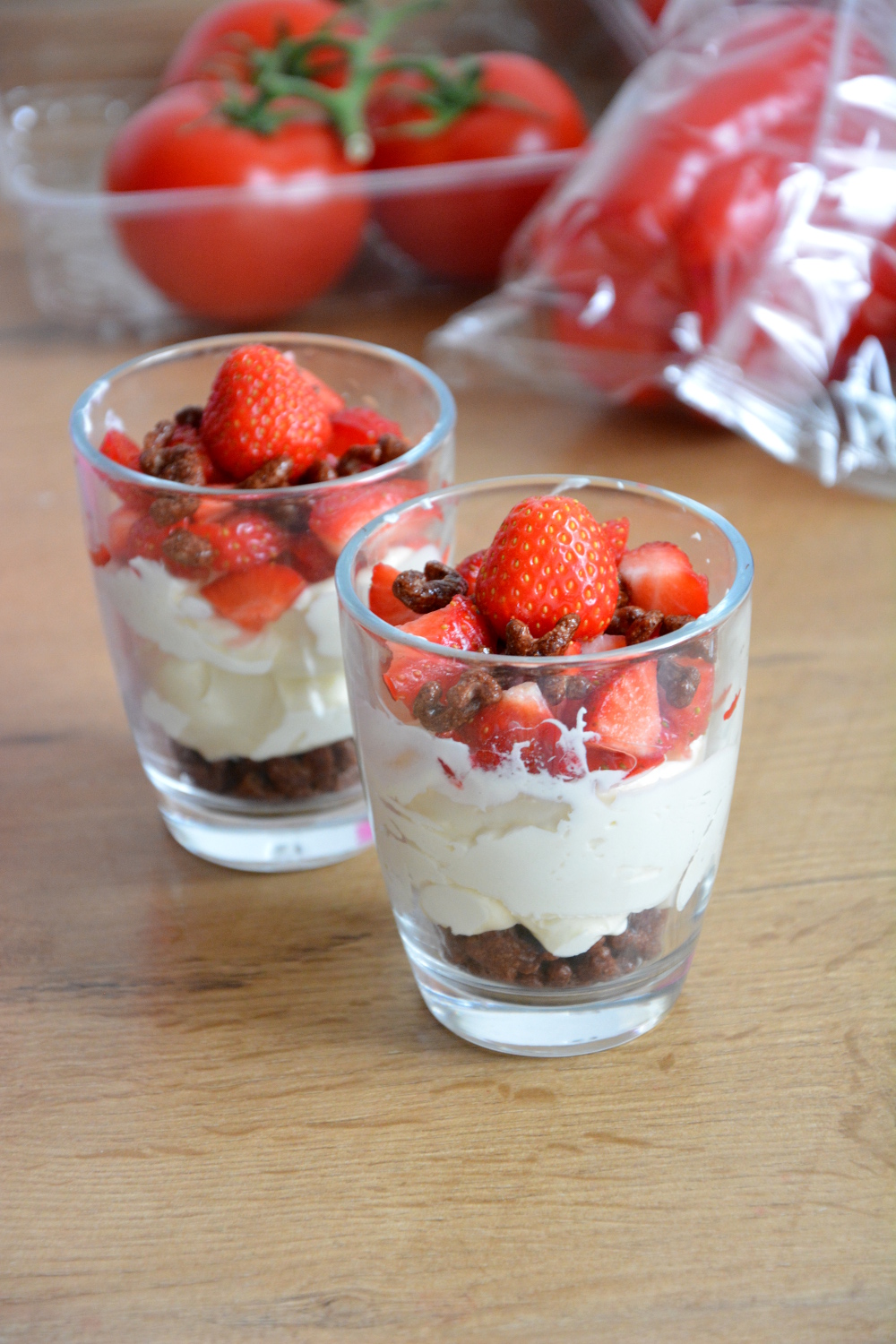 In summer, it is often too hot to bake. But I have never wanted to miss a homemade dessert at the weekend, so I always look for a lot of no-bake desserts in July and August. Trifles have always worked for me this far – especially since I discovered something really neat. 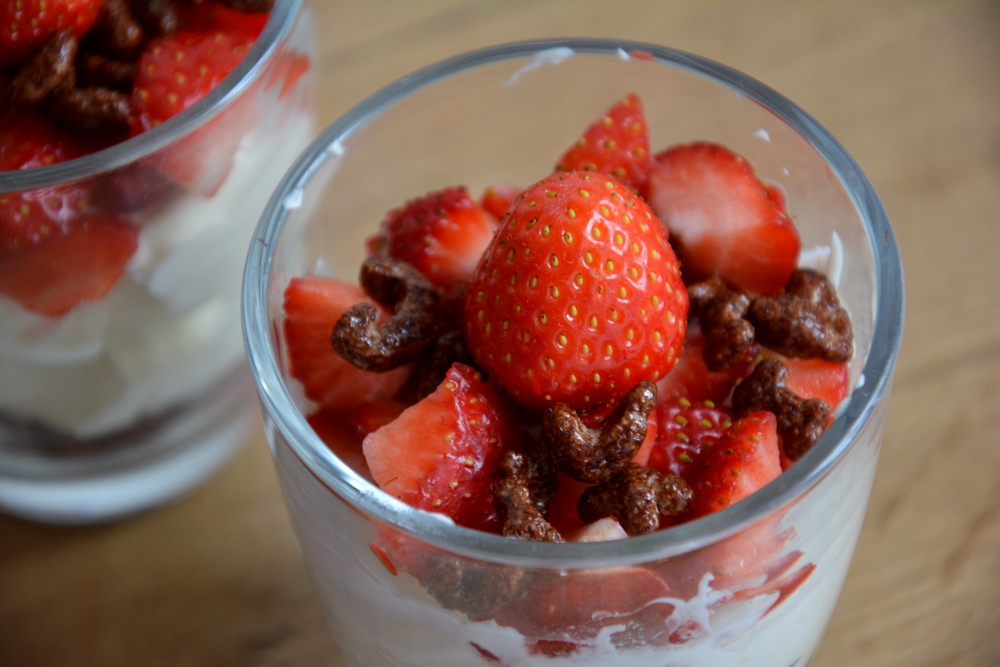 You can melt a bar of white chocolate in Rama heavy cream and beat the cream until stiff. You get a kind of mousse then which tastes like white chocolate and fits perfectly the consictency and aroma of juicy berries or other fruit. 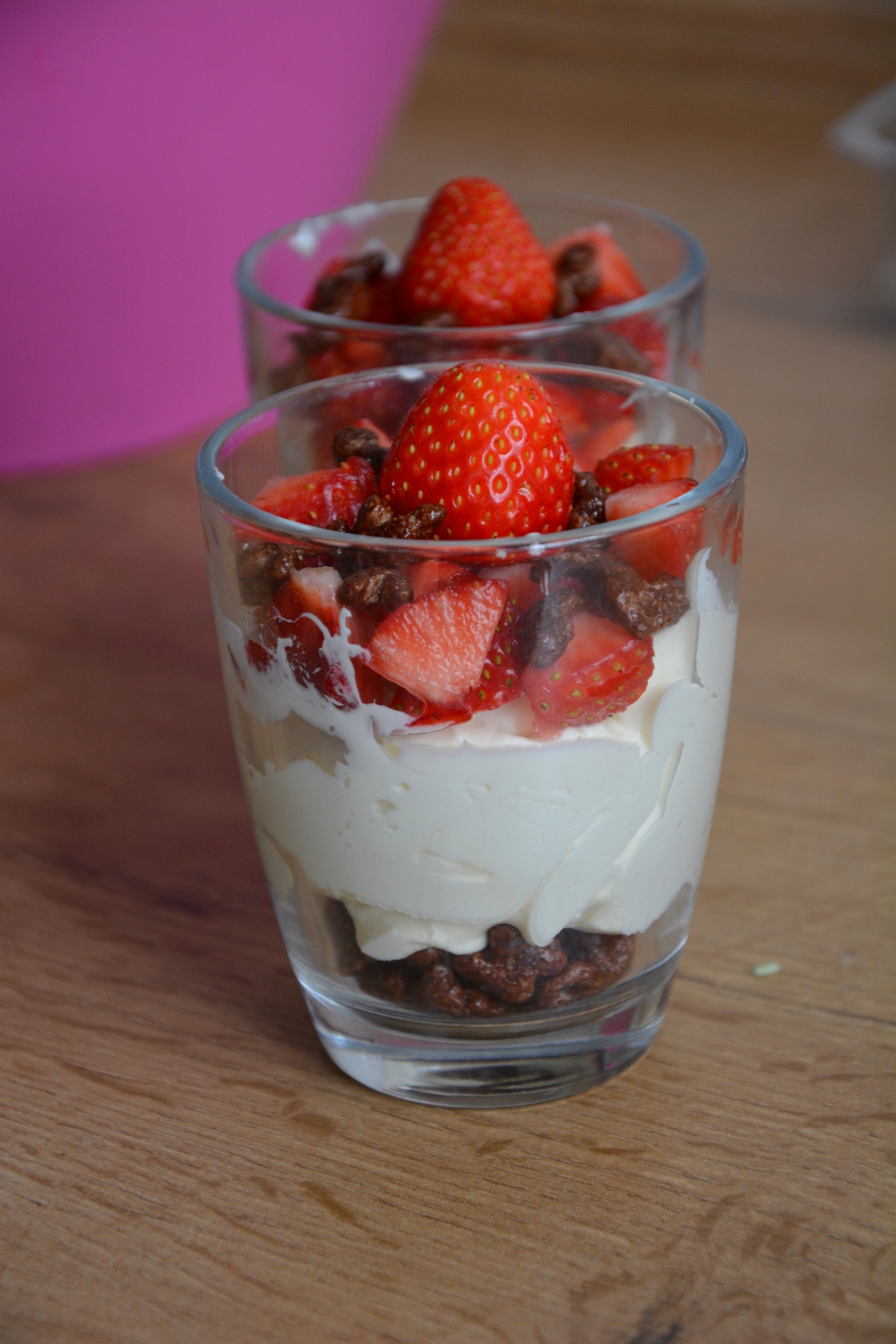 After going to a strawberry field, we had picked a huge amount of strawberries which I did not want to transform into jam. That is why I made these gorgeous triffles. 4 ingredients and about 15 minutes prep time, do I need to say more? Go ahead and try yourself.

First, you should prepare the heavy cream.
Chop the white chocolate and dissolve it in the cream over low heat in a small saucepan. Let the mixture cool overnight in the fridge.

Cut the strawberries into small cubes. You might add a little vanilla to the pieces.

In a medium-sized bowl, beat the heavy cream until stiff.

I’m not kidding. This is a recipe telling you how to make a heavenly hot and cold, a crispy and creamy contrast in a dessert. 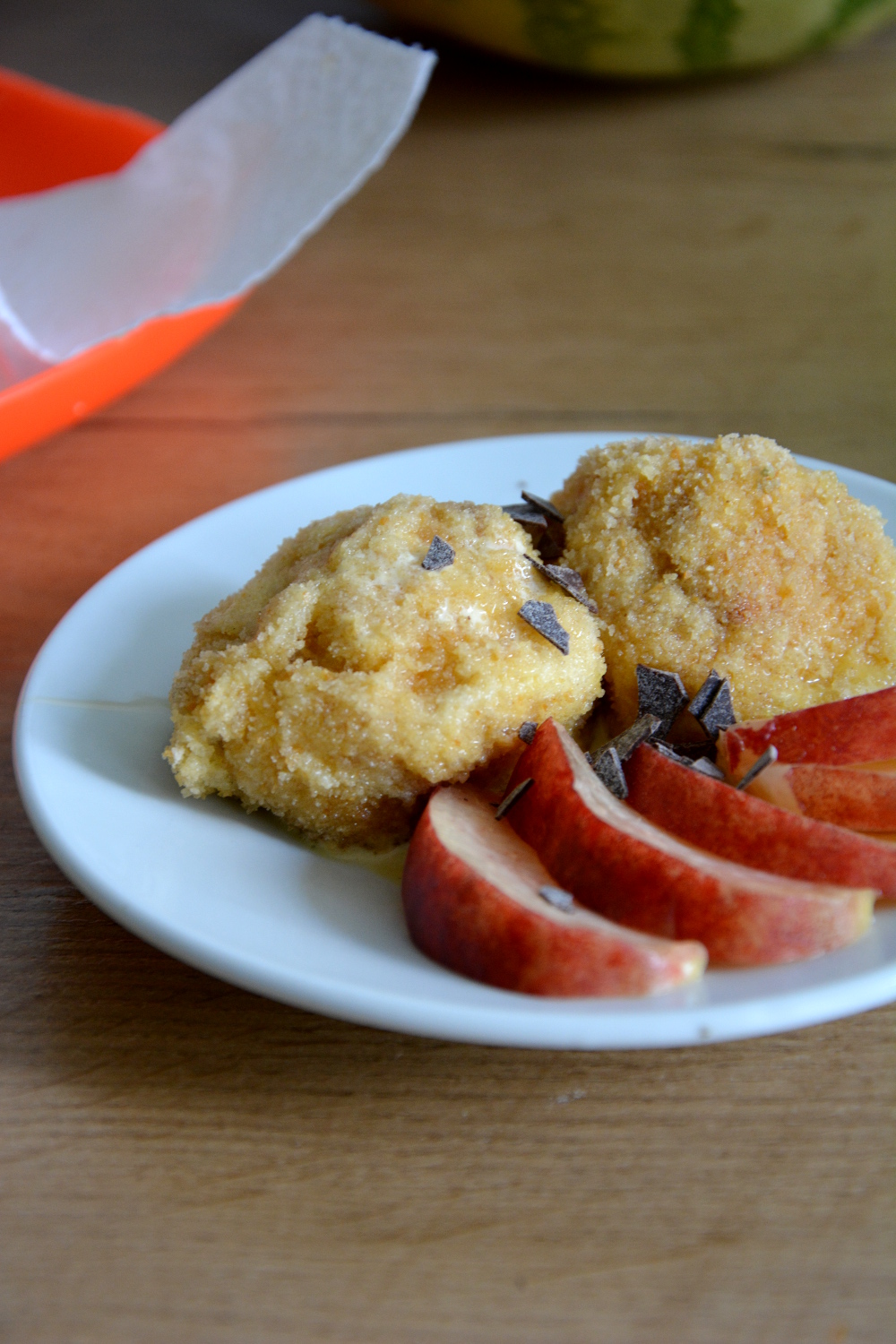 Frying ice cream is actually easier than it sounds and I was glad to find that out, because I had had an exploding churro incident not long ago and had quite repulsion towards frying food. But this recipe requires just a little timing, then everything should be all right. 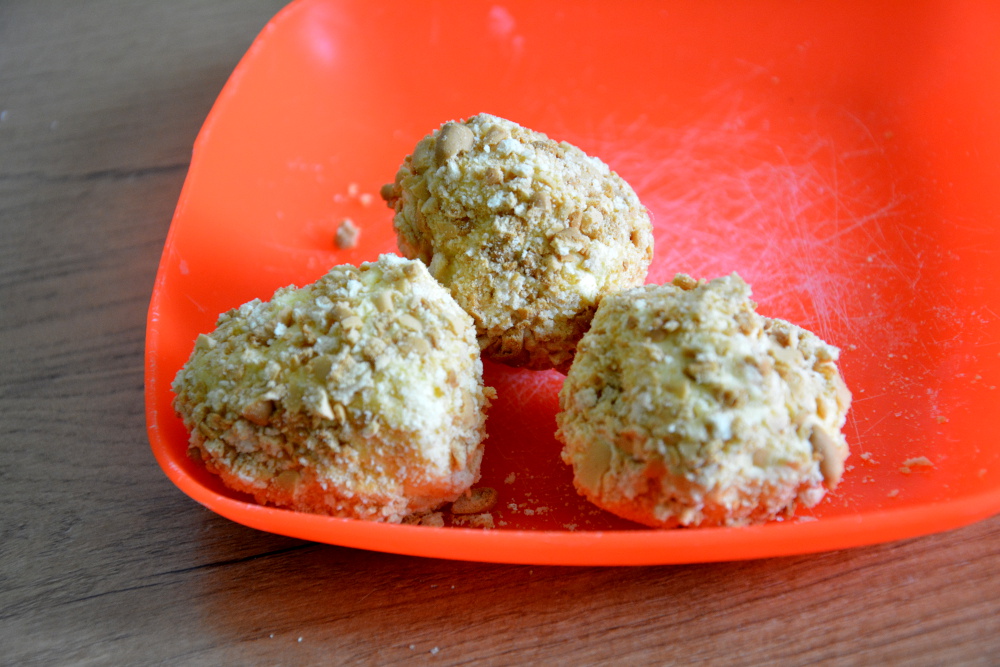 Scoop out the ice cream, press it into the form of a ball with your hands, if necessary. Roll the ice cream spheres in the crushed cookies, then place in the freezer for at least an hour.

Pour oil into a medium-sized or a small, but deep pan, about 4 cm (1 1/2 inches) and heat it up. You know it has the right temperature, when small bubbles appear from a wooden skewer placed in the oil.
Prepare a plate with paper towels for the fried scoops of ice cream.
While the oil is getting hot, take out the ice cream and roll the balls first in blended egg, then in breadcrumbs.

Carefully place each ball into the hot oil (a large spoon works best for that) and fry until the crust turns from pale to gold, about 90 seconds to 2 minutes. Carefully place the fried ball on the paper towel, then transfer to a plate.

You should serve this dessert immediately after preparing it, so the difference in temperature between crust and ice cream is bigger.

I already announced that another ‘Food on the go’ would appear on the blog soon, since I was on vacation again. It is the pretty cool thing about having finished school: you have time to go wherever you want. So I was in a couple of cities and towns again. Let me show you, what precious food I found there. 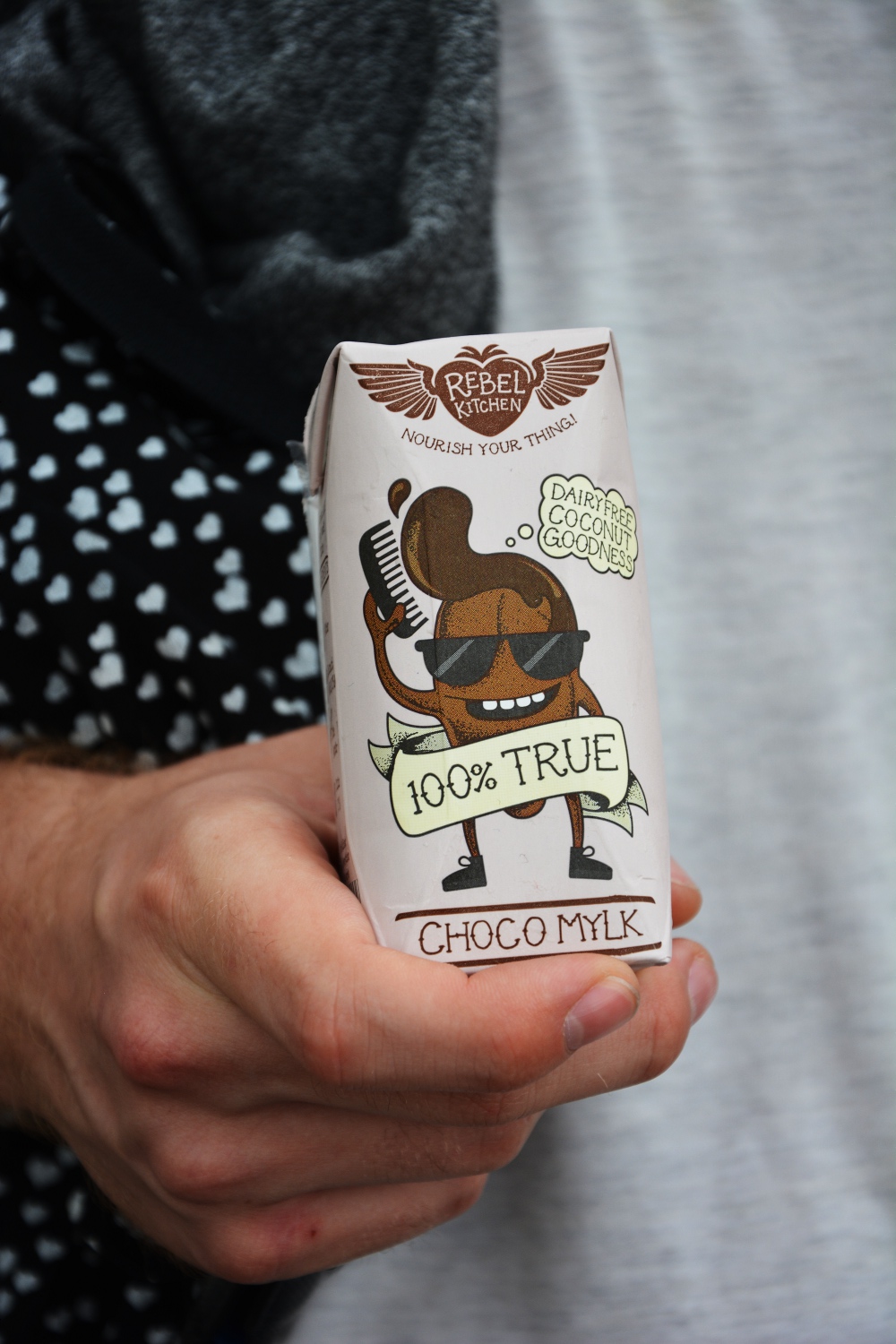 First, I was in Berlin again and visited a vegan food market there. For refreshind, we tried the flavoured coconut milk with a cute design. The ‘Veganz’ shop was pretty expensive, you’d better buy normal stuff like fruit, vegetables and bread in a normal supermarket. But there is everything and more in a vegan version available. I had a chocolate coconut milk, which I liked, because it reminded me of Bounty. If you want some interesting and cheap food, you should walk around the area of the Adalbertstraße. There are many restaurants and bars offering food of foreign origin. I had an awesome falafel wrap at a Lebanese restaurant which offers a lot of Oriental vegetarian and vegan meals. 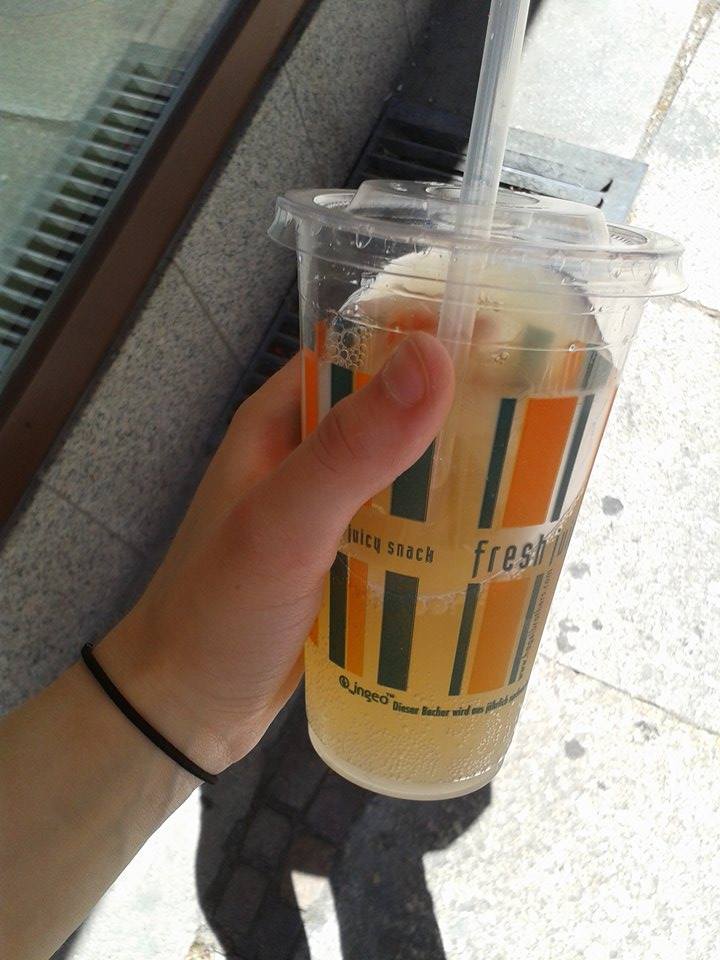 The next day I was in Leipzig, where I found a neat place called “Bagel Brothers”. I am not that into bagels, but the hop offers homemade apple lemonade with fresh apple juice. Perfect on a hot day! Walk along Karli street for some good vegetarian and vegan food. You should try one of the kebab shops, they often have fancy menus with falafel, tofu and seitan fillings as a substitute for the traditional meat stuff. I had a wrap with cheese and spinach which made me very happy (you do realize I like wraps). I was also in France for several days where we visited Nice, Cannes, Monaco and Marseille. On our first day in Nice, we found a bakery providing traditional sweets of southern France, offering these buttery cookies and the traditional navettes, butter cookies with orange flavour. I personally liked the violet flavoured cookie above, but I am sure it tastes best as a part of a triffle or cheesecake, since it was a bit dry. 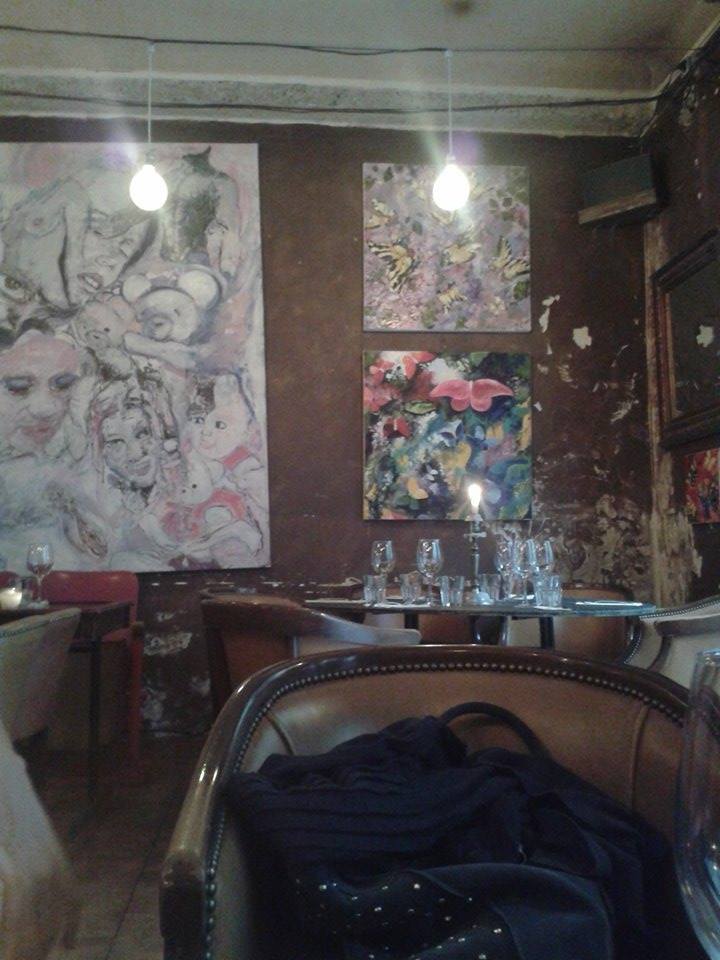 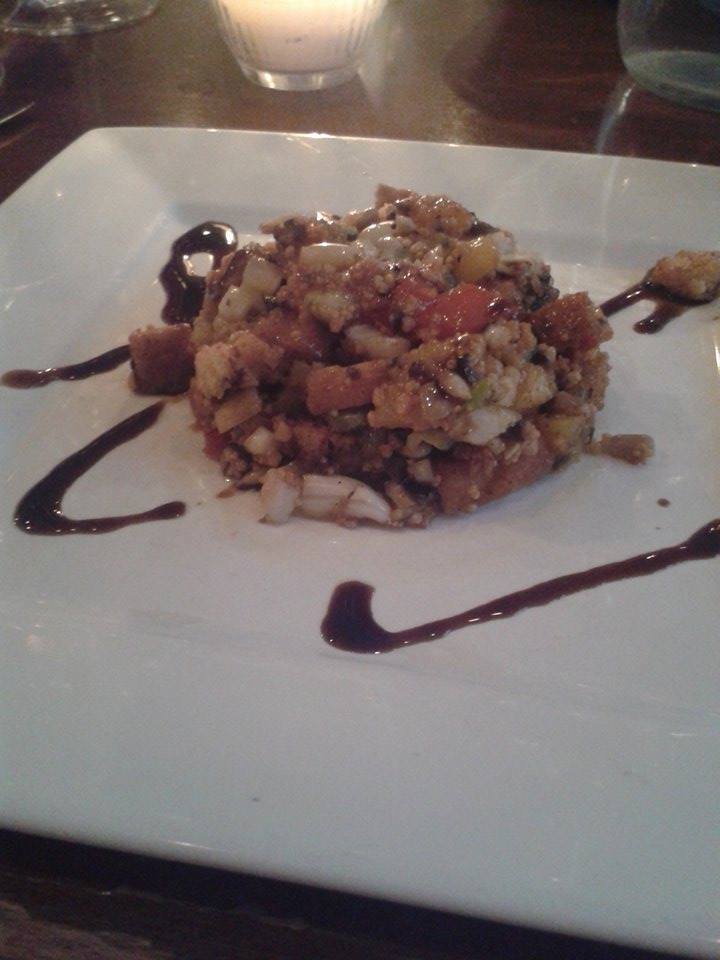 The best food I had was at a small restaurant a few metres away from our hotel in Nice. ‘Chez Moi’ offers a delicious menu with three courses for 15 Euros. You have the choice between about 3 different meals per course. When we had dinner there, we only saw French people there, which means this place is not a tourist trap. I had a very interesting salad with roasted bread, fresh tomatos, peaches and fennel. The main course was a risotto with vegetables and pickled citrus – try this and you will know what heaven is like. As a dessert, I chose a slice of apricot tart and concluded that I have to learn more about french patisserie. Danm, they know how to cook! In Marseille, we proceeded with exploring French pastries. First thing, we ate our was through fruity macarons and then I fell in love with a citrus meringue tart. 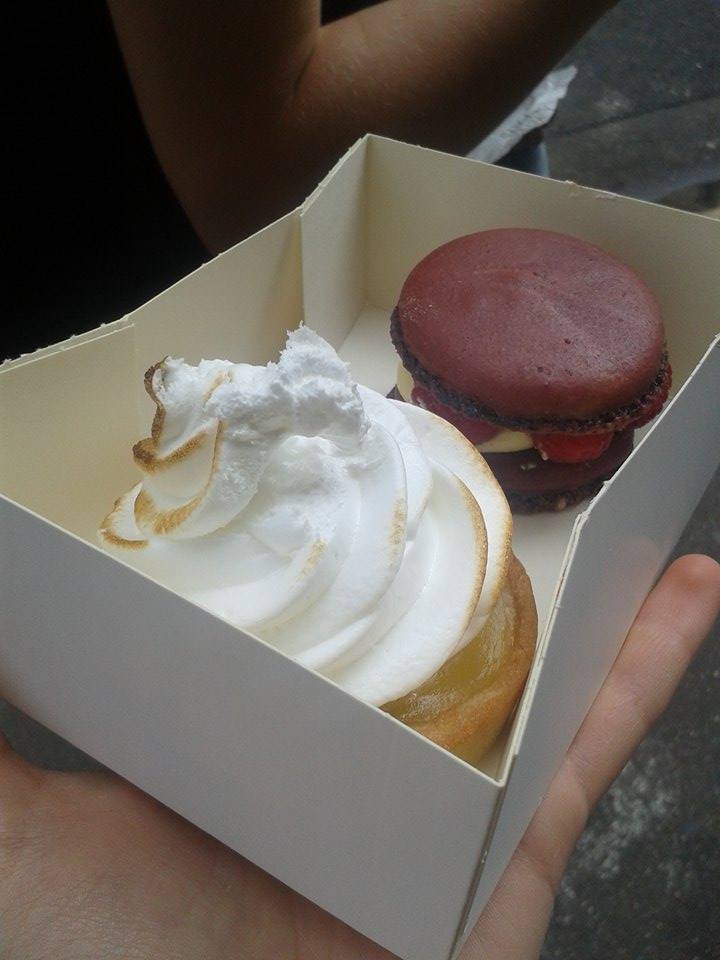 The markets in southern France offer a lot of good fruit and vegetables which are ripe and full of flavour. We went across a food market and had some figs, apricots, watermelon and honeydew. 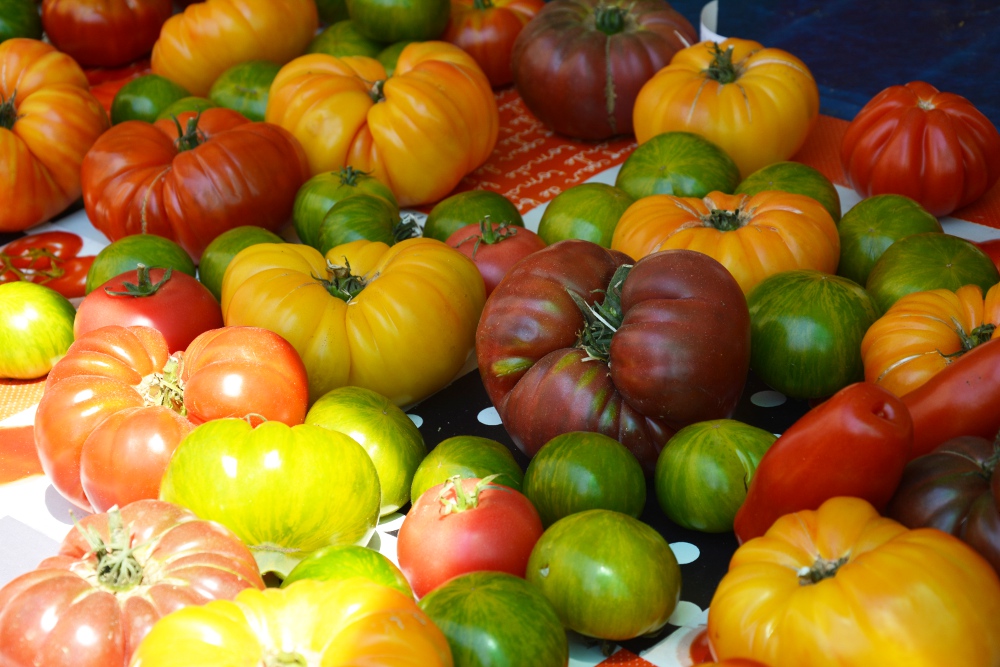 In Cannes, we tried some sugared churros. These are really fun to me, because I love finger food and food that can be dipped into different sauces. Maybe I should give these another try (The last time I fried churros, one of them exploded and my whole kitchen was messed up). 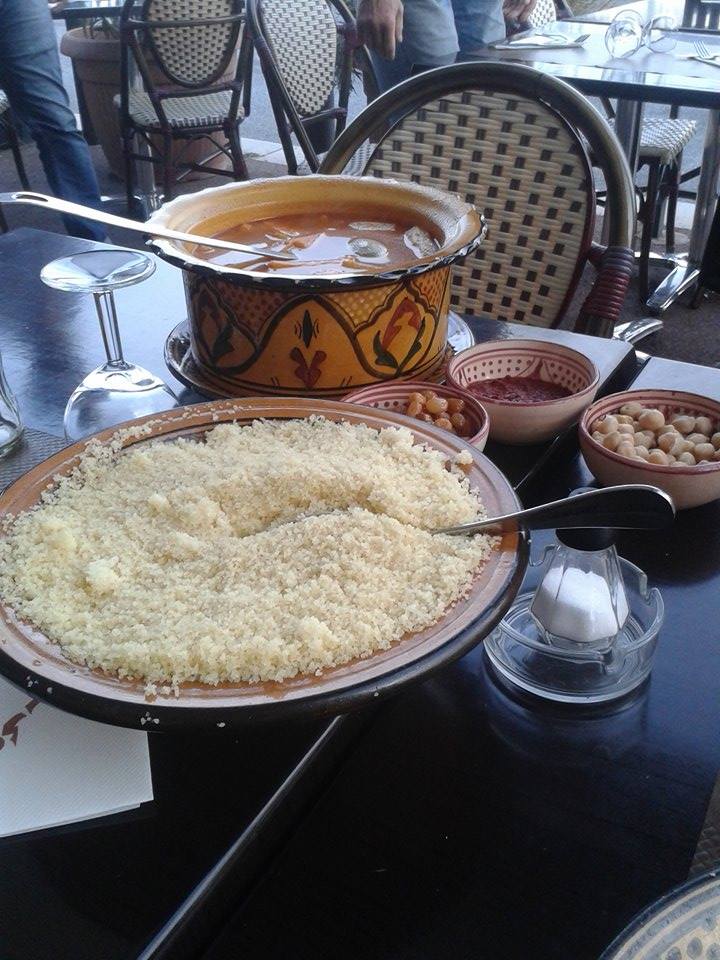 In Le Souk, a restaurant at the Old Harbor in Marseille, you can try very good Moroccan food. We ordered couscous and got a big pot with a kind of spiced vegetable soup, chickpeas, raisins with chinnamon, chicken with curcuma and chili paste. It is a lot of fun to sit together with friends and combine the different components. And last but not least: our food at Lafayette Gourmet. We tried Belgian chocolate and caramel soft ice cream in the mall. I had a salad with parmesan and a vinaigrette dressind in a cute little glass bottle.
One highlight was the creamy mousse au chocolat. I really need to make this at home or look for a Lafayette Gourmet in Berlin, so I can buy some fresh mousse as a dessert.